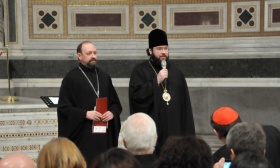 On 17 December 2015, the concert of the Moscow Synodal Choir conducted by Alexei Puzakov, an honoured artist of Russia, and the Sistine Chapel Choir conducted by Monsignor Massimo Palombella took place at the Basilica of St. John Lateran in Rome on the initiative of the Joint Working Group on cultural cooperation between the Russian Orthodox Church and the Holy See.

Before the concert Cardinal Kurt Koch, president of the Pontifical Council for Promoting Christian Unity, read out greetings from Pope Frances.

Attending the concert were Ambassador Alexander Avdeyev of the Russian Federation to the Holy See; Bishop Carlos Azevedo, a delegate of the Pontifical Council for Culture; Monsignor Visvaldas Kulbokas of the Secretariat of State, many clerics and representatives of business circles of Italy and Russia.

The Sistine Chapel Choir performed ‘O Sapientia’ choral, ‘Sanctus’ and ‘Agnus Dei’ by Giovanni Palestrina. The Synodal Choir performed ‘Praise ye the Name of the Lord’, ‘In Thy Kingdom’ and ‘The Great Doxology’ by Metropolitan Hilarion of Volokolamsk. ‘The Christmas Concert’ by Nikolai Vedernikov and ‘The Lord’s Journeys’ by Andrei Mikita. In conclusion of the concert both choirs sang ‘We Praise Thee, O Lord’ by Dmitry Bortnyaynsky and ‘Tu es Petrus’ and ‘Ave Maria’ by Giovanni Palestrina.